Break the Tobacco Trance with the Last Packet session, is an effective way to stop smoking! Do you want to stop smoking? Are you thinking about quitting? Are you fed-up with smoking and its negative consequences like the smell, the cough, the damage to your health, the social stigma and the freedom of which smoking robs you? Maybe you've already tried without success? If so, the Last Packet session is a unique and highly successful method to assist you in stopping for good.

As well as the well-known physical addiction of cigarettes, Angela Jullings, Stop Smoking specialist and founder of Last Packet, understands the psychological attachment that keeps smokers smoking. Your Last Packet session addresses the psychological issues around cigarettes and tobacco whilst also easing the physical elements associated with withdrawal.

Based in West London, Last Packet coach, Angela Jullings is a registered hypnotherapist in advanced hypnotherapy and psychotherapy and since 1994 has practised as a Stop Smoking specialist.  Well regarded in he field, Angela uses tailored techniques for you as an individual in order to help you quit smoking and remain free from tobacco.

What does the Stop Smoking session involve?

The Last Packet session spans 2 hours, is one-to-one with Angela Jullings and is tailored to the individual smoker who wishes to quit smoking. Prior to the session Angela will coach you with instructions for providing her with detailed information on your smoking habit, along with psychological suggestions on how to prepare yourself for stopping.

During the session, which is often one of fun and stimulation, Angela may use a variety of therapies and techniques in which she’s trained, depending on the individual. Such therapies include hypnotherapy, NLP (neuro linguistic programming), EFT (Emotional Freedom Technique), EMDR (eye movement desensitisation and reprocessing) and Timeline Therapy, in order to break the Tobacco Trance and help you become a permanent non-smoker.

During the session Angela will assist you in uncovering just where and how you’ve been in the tobacco trance. The process will awake you from that trance, helping you see its illusion and myths. The process also addresses situations which act as triggers for smoking, both emotional and physical triggers, so that in future, those triggers leave you free from tobacco.

During the session, Angela will also help you remain slim with the use of hypnosis. Any questions you have about weight control will be answered in the session and Angela will explain the process your body goes through as a smoker and as a new non-smoker.

Angela’s approach will help you think about cigarettes and tobacco in a very different way. You’ll leave with a sense of freedom and a new set of eyes and ears around smoking!

How does hypnotherapy work for quitting smoking?

The most important element in your decision to stop smoking is a desire to stop. Even if you think you can’t stop, wanting to stop is essential for success.

As no-one can force you to do something you don’t wish to do, even during hypnosis, the ingredient of wanting to quit smoking is the canvas needed to paint a completely different view on smoking. With the use of hypnotherapy, which utilises the unconscious, creative and deeper part of your mind and controls your physical body, Angela will guide you in making many changes around tobacco – both emotionally and physically as well as helping you change your beliefs around smoking.

All behaviours and habits are unconscious. Your unconscious mind is the powerhouse of all your emotions, your physical impulses and abilities, your dreams, your desires, memories, beliefs, creativity and values. As all behaviour is unconscious it is this powerhouse which, when accessed through hypnosis, can be guided and suggested to, making the most profound and easy changes in your behaviour.

NLP, which has been called the study of the science of the mind, enables Angela to elicit your unconscious strategy around smoking and help you create a new way of approaching health and cigarettes.

EFT is a type of acupressure which optimises emotional health and aids physical symptoms. The use of EFT during the Last Packet session promotes emotional well-being and can stop withdrawl symptoms.

EMDR, which involves a series of eye movements originally devised to help people suffering from trauma, is a quick and easy way to "desensitise" you from cigarettes. Client feedback indicates this method leaves them feeling "detached" from cigarettes and tobacco.

Timeline Therapy is a type of regression therapy and is used as such so that Angela can help you uncover and let go of old beliefs around smoking.

Angela's session will also help you break the Tobacco Trance. With the use of the above therapies, once that old trance has been broken, you'll be seeing, talking and feeling very differently about smoking.

What will I experience?

As everyone is individual, no two Last Packet sessions will be the same. However, client feedback is that they found the session "enlightening", "fun and stimulating", "relaxing".

During the hypnosis part of the session, you will probably feel deeply relaxed and, sometimes, may even drift away consciously from the sound of Angela's voice. If this happens, it doesn't matter as you will be listening unconsciously at all times. The unconscious mind only ever pays attention to suggestions it wishes to - hence the most important element in stopping smoking is your desire to stop!

What happens after the session?

After the Last Packet session, Angela will provide you with a hypnosis recording and recommends you listen to the CD at night as you're falling asleep, for the next 21 days.

In the unlikely event that you don't find it easy to remain a non-smoker, Angela provides telephone support for the next 6 months.   This service is there to ensure you stay free from tobacco. 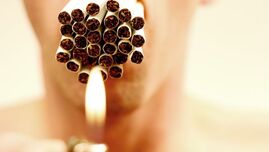 Find out more about the Last Packet session and get ready to throw away your last packet!  If you wish to book a Last Packet appointment or find out more, call Angela on 07736 480 376 or email her.
​
The Last Packet hypnosis download is also available for purchase separately.